skip to main | skip to sidebar

My blog, that is.

Pondering revamping the whole premise to something more forward-looking.

Or I could just continue to use it for whining :)

It is sunny, about 60 degrees and a beautiful Seattle day! Good luck to those in DC area!

You know that painting, The Scream? Perfect. I mean PERfect depiction.

Do you ever wish you could just scream and then everything would be ok and your friends would still smile at you, naiively thinking, she's pretty nice most of the time?

Reconstruction surgery. Definately a good idea for me as I am very vain. Surgery went just ducky. But, did they listen when we told them that I am very allergic to tape? F&ck no. Because I was so drugged up to deal with the incision fun I did not notice that not only had they put yards of tape on me, but that the inflamed rash had spread to my back, legs, arms.

So now, delight of delights, they (those who use their powers for EVIL) have me taking prendisone for the systemic allergic reaction, aka my skin is on fire. Have you ever taken prendisone? It makes you feel even MORE postal than you already felt for having an allergy that could have totally FUC&king been prevented.

Please send me peaceful karma and virtual chocolate. If I can just make it through the next few days.

Back to Rain and More Rain in Seattle!

Sigh. At least my umbrella is cheerful!

DonorsChoose helps support teachers and their classrooms. Please visit my page, and if you feel like it, throw a couple bucks at my requested grant.
Thank you!

What do you call it?

An "anniversary?" It's been a year. March 6, 2008, to be exact. That week I found a lump. No, not me. This is probably nothing. But I make 2 appointments: one with my regular doc and one with the mammogram people. Those guys give me any appointment time I want when I say I found a lump. Still, I am not freaking out.

The doc says could be just a cyst, but you should go get a mammogram. Yeah, says I. Got an appointment. I had a whole 24 hours between these 2 appointments to just putz around and think it was just a cyst.

Then the mammogram. She looks poker faced and says, we'll go ahead and just check this with the ultrasound. Ultrasound lady did not bother with poker face. "IT'S CANCER." WTF? I could not speak because I was lying down and the tears were all pouring back into my throat. And, because, hey it is just a cyst, I was at this appointment all by my freaking self. She tried to hold my hand, but she was pretty much a gadget/machine person, not a comfort the idiot person.

Well, that was my week 1 year ago. And I wonder why I cannot get my head around work this week. Think I'll go scream now.

Truffle salt and other goodies!

I had the day off to go hang with my sister while she had an icky girl procedure done. She went home to her heating pad and percocets, and I went downtown for a little shopping: Pacific Place for O&Co and WSonoma (gift cards)! 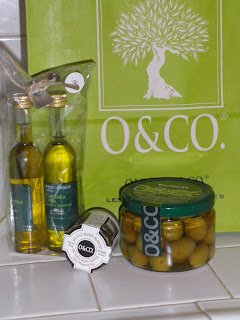 O&Co had quite a few items on sale - some of which I bought (the olives). My other two goodies are truffle salt and two of their "grassy" olive oils to try out.
Now I am in search of great applications for the truffle salt, besides french fries (which are an AMAZING host for this, I must say)!
Williams Sonoma loot included a Lodge cast iron Grill Pan (pre-seasoned) and a new oven thermometer. Not exciting but much needed.

And, here is the bit about me lying. Unfortunately the LA Times ran a series of photos by the White House photographer of behind-the-scenes during the first days of the new administration. This is my favorite: 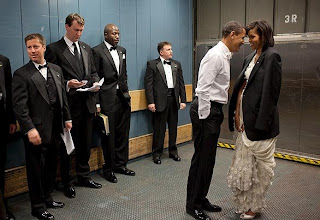 Penny for your thoughts

Ok, I am a bit obamobsessed, but this is the last* post about him and then I will just calm down, already! 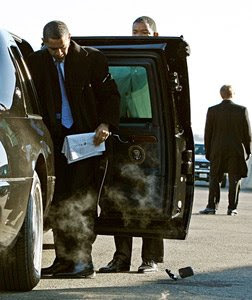 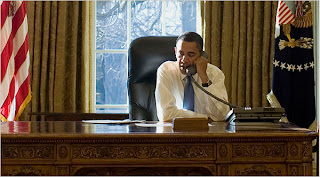 This from NYT, 01/21/09:
The new president effectively reversed a post-9/11 Bush administration policy making it easier for government agencies to deny requests for records under the Freedom of Information Act, and effectively repealed a Bush executive order that allowed former presidents or their heirs to claim executive privilege in an effort to keep records secret.

Welcome to the future! 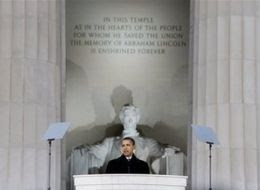 "...We remain a young nation, but in the words of Scripture, the time has come to set aside childish things. The time has come to reaffirm our enduring spirit; to choose our better history; to carry forward that precious gift, that noble idea, passed on from generation to generation: the God-given promise that all are equal, all are free and all deserve a chance to pursue their full measure of happiness...."